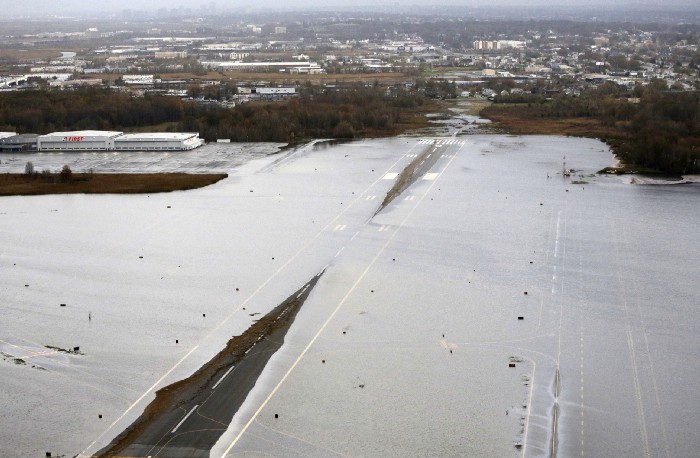 In the news: The Oxford Times

Adam and I officially set up FloodFlash in the kitchen of my flat in September 2016. It was a small step, the result of a long line of conversations about an idea which we thought could work. We didn’t know at the time, but only 9 months later we would be setting up for real. Here we tell the story of how it all began: where the inspiration for FloodFlash came from and how we are using advances in risk modelling and IoT technology to help businesses get access to a different kind of insurance.

Before starting a business together, we were colleagues at RMS, the world’s largest catastrophe risk modelling company. In that life, we worked extensively on calculating the impacts of natural disasters for insurance. Everything from earthquakes and hurricanes through to flu pandemics and terrorism, and of course floods. Adam has a degree from Cambridge in Natural Sciences and I have a PhD in glaciology and hydrology. Between us, we have the tools needed to quantify complex risks like flooding.

While we have launched in the UK, it was a big event on the other side of the Atlantic in 2012 which really sparked the FloodFlash idea. Hurricane Sandy was a tropical storm that eventually made a near-direct hit on New York, causing extensive flooding across the city. There were billions of dollars in damages and the New York Metropolitan Transport Authority (MTA) was among those most affected. It was a major clean-up but, although they had insurance before Sandy, MTA found it very difficult to find cover again the next year.

Without options in the traditional insurance market, MTA issued something called a parametric catastrophe bond. It may sound complicated but, just like FloodFlash, it is simply an arrangement which pays a sum of money if a certain event happens. In this case, it was water above a certain depth in New York Harbour (sound familiar?). The MTA’s first cat bond, called MetroCat Re, would have paid $200 million if another hurricane had caused flooding greater than 8.5 ft at a tide gauge in Battery Park.

Catastrophe bonds are available to large corporations, governments and even insurance companies themselves. There are no products like this, however, to protect smaller businesses who are at risk of flooding and have everything to lose. Some of these businesses will not be able to buy traditional flood insurance or will be subject to high premiums, large deductibles and reduced limits. Our aim at FloodFlash aim is to make financial flood protection available to everyone. We are taking that same concept which works for large corporations like the New York MTA and making it available to the mass market. It really is our business to make yours more resilient.

FloodFlash have developed the two things which you need to make this happen: an advanced pricing algorithm which calculates flood risk for any building and an IoT water level sensor which can tell us immediately if a customer has been flooded. With these, our business customers can select a policy which pays out at whatever level of flooding they want protection from. You can even adjust the sliding scale to reflect what you are willing to pay in premiums or to reflect measures you have taken to improve flood resilience.

Last year FloodFlash ran a pilot scheme with just a few UK small businesses. The idea was to show that this kind of insurance was possible, even on a small scale. We made our way through the FCA Regulatory Sandbox, and were supported with funding from the Insurtech Gateway and insurance capacity from Everest Re.

The success of that pilot has helped us to get where we are now. With further funding, we have launched in the UK and are ready to support our first cohort of business customers. This next phase is where we prove that the FloodFlash model can work at scale. We are learning all we can about our customers, their needs and how businesses want to interact with this new kind of insurance. Find out more by following our blog, or check us out at www.floodflash.co.